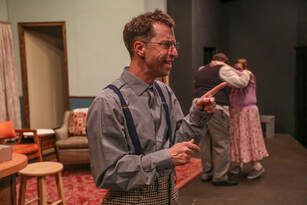 ​Open Door Theatre began in the spring of 2014 when five friends met to discuss the possibility of forming a new community theatre for the Bozeman area. Our chosen name reflects a principal goal: to be a place for anyone interested to participate in producing plays, either as an actor, a crew member, or in governing the group.

Our first interest meeting in August, 2014, attracted over 30 people who confirmed for us that there is talent in Bozeman ready to work toward another theatre company. We even acquired a couple of new board members. By that time we had been accepted as a client by the umbrella arts organization Montana Arts which meant that donations to Open Door Theatre would be tax deductible until we were accepted by the necessary government agencies as a non-profit on our own. (We now have our own 501(c)3 status but are very grateful to Montana Arts for helping us get started.) 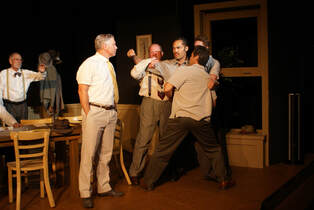 We devised a budget estimating the funds we'd have to raise before we could produce our first two plays and we began writing letters and sending emails to people we thought might support us. Our door was truly opened in December 2014 when we received a significant gift from Bruce Jodar and Kimberlie Birdwell of the Jodar Family Foundation. Other donors soon stepped forward, willing to take a chance on a totally unknown organization.

We made an arrangement with the Kaleidoscope Youth Theater to rent their space for rehearsals and performances. Our play-reading  committee selected two comedies for our season: Rick Abbott's Play On! and Neil Simon's Brighton Beach Memoirs. We rented a post office box, arranged for a telephone, created a Facebook page, and established a system for accepting donations and selling tickets on-line. We began filing necessary papers to become recognized by the State of Montana government as well as the IRS.

In early January, 2015, Neil Gregersen held auditions for our first production which he had agreed to direct. Rehearsals began immediately after casting was complete. Neil and a volunteer construction crew began building the set he had designed. Costumes and props were designed or located, a sound design was created, ushers were recruited, a box office manager was found, and on Friday, February 27, 2015, the lights came up on Open Door Theatre's inaugural production, Play On!

And the rest — or so we imagine our children and grandchildren saying — the rest is history.